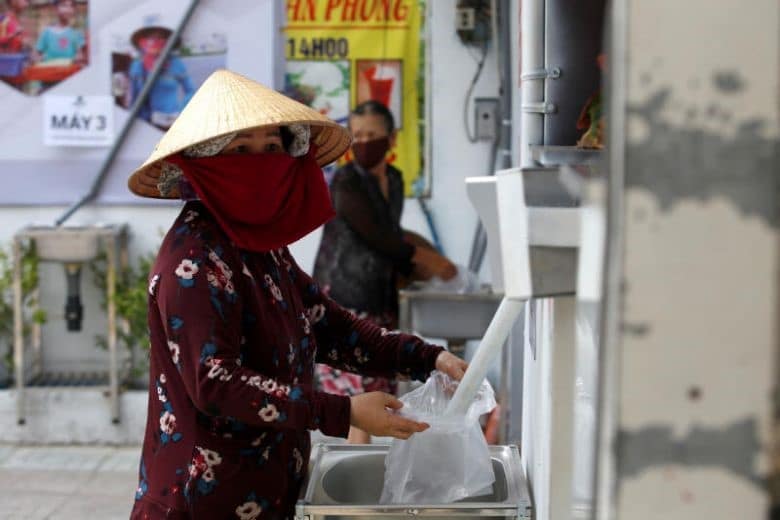 HO CHI MINH CITY (REUTERS) – A Vietnamese entrepreneur in Ho Chi Minh City has invented a 24/7 automatic dispensing machine providing free rice for people out of work amid an ongoing nationwide lockdown to curb the spread of the novel coronavirus.

Vietnam has reported 262 Covid-19 cases, and no deaths so far, but as a result of a 15-day social distancing programme that began on March 31, many small businesses have been shuttered and thousands of people temporarily laid off from work.

Ms Nguyen Thi Ly’s husband was among those who have lost their job.

“This rice ATM has been helpful. With this one bag of rice, we can have enough for one day,” said the 34-year-old mother of three children.

“Now, we only need other food. Our neighbours sometimes gave us some leftover food, or we have instant noodles.”

The machine distributes a 1.5kg bagful of rice from a small silo to waiting workers, many of whom are street sellers or people who earned a living from cash-in-hand jobs like housekeeping or selling lottery tickets.

Mr Hoang Tuan Anh, the businessman behind the idea, had initially donated a batch of smart doorbells to hospitals in Ho Chi Minh City before turning his technological expertise to food distribution.

Similar “rice ATMs” have been set up in other big cities like Hanoi, Hue and Danang, according to state media.

Employees monitoring the rice ATM declined to comment, but Mr Anh told state media he wanted people to feel they still had access to food and resources, despite the current economic difficulties they found themselves in.

“I refer to this machine as a ‘rice ATM’ because people can withdraw rice from it, assured that there are still good people out there who want to give them a second chance,” he said.

While many in the communist-ruled country can rely on a social safety net, and the government has introduced a stimulus package designed to help society’s most vulnerable, some people living on the margin, like Ms Ly and her family, have not received enough support.

“I read about this rice ATM on the Internet. I came to check it out, and couldn’t believe it came out for real. I really hope the sponsors would keep doing this until the end of the pandemic,” said Ms Ly, adding that her family’s biggest problem was now paying their rent.