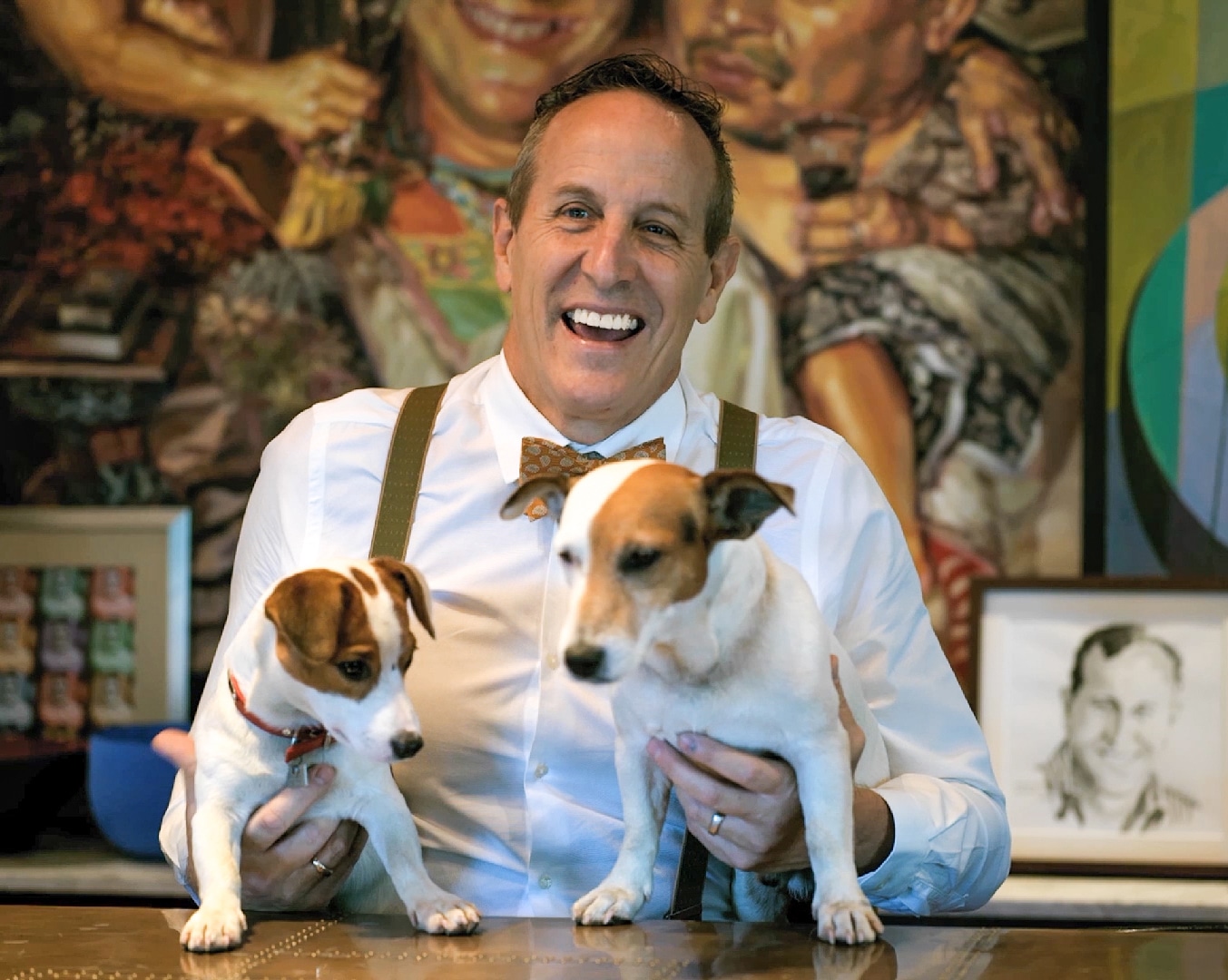 Bill Bensley is world renown for his outstanding, unique and inspiring award-winning hotel, landscape and interior designs and eye-catching architecture. What is not so widely known, but comes as no surprise to those that know him, is that he is a concerned conservationist and passionate philanthropist and an eco-warrior. In his own words Bill shares, “my main purpose in life, besides having as much fun as possible, is to help the needy, to education, help animals and help the planet via conservation”.

Bill has seamlessly and brilliantly combined his work with these two passions to benefit the environments and communities in which he has created his incredible projects.  He celebrates the 30th anniversary of BENSLEY Design Studios in 2020 and is proud and humbled by the many awards the hotels he has designed have won as well as those bestowed on him personally for design, leadership and sustainability.

Born in California, his parents were English immigrants.  His family had a small farm where they were pretty much self-sustaining, raising bees, quails, chickens, ducks and rabbits and growing mushrooms and a huge variety of veggies in a garden complete with a compost heap. They would travel as a family in their little trailer almost every weekend to a camp spot close by and in the summer they would travel all over the states. He grew up with a great love for the wilderness and learnt how to sustain the family with food. It makes him smile to hear the word sustainability used so frequently these days as though it is a new idea. 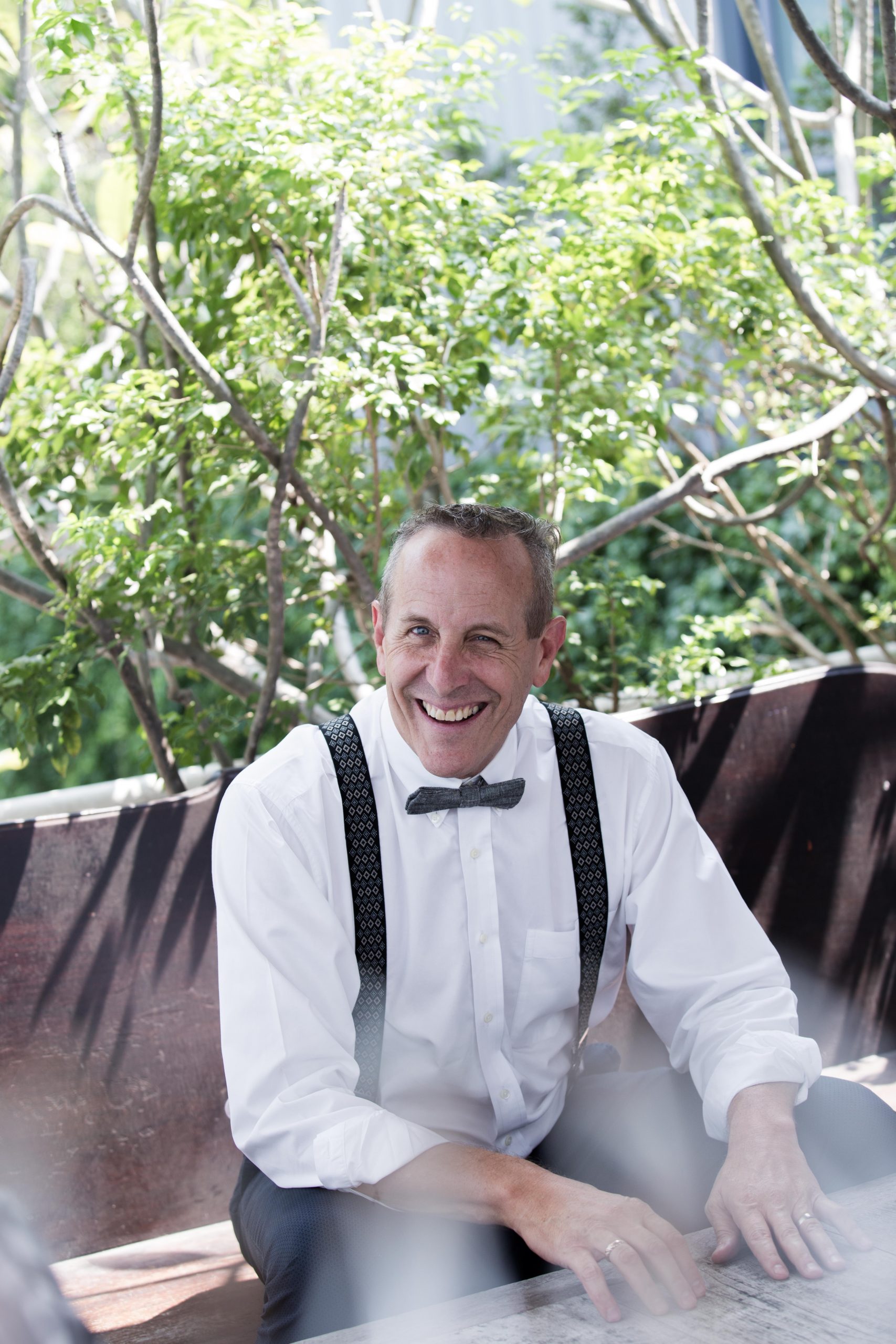 Affectionately known as the “Willy Wonka of Design”, Bill is a a jack of all trades – gardener, fisherman, architect, interior designer, lover of all things natural, and most of all, a wide-ranging explorer of as many corners of the earth as he can. Raised amidst the orange trees of California, the Harvard Graduate took off for Asia the day after graduation and never looked back. After a few years working in Hong Kong and Singapore, he set up shop in Bangkok in 1989, soon followed by a BENSLEY branch in Bali in 1990. With a team of 150 interior designers, architects, landscape designers, artists and makers of all things beautiful – as well as his husband Jirachai and their six Jack Russells – Bensley has brought to life over 200 resorts, hotels and palaces in over 30 countries, and is on a never-ending quest to create their best work yet. Over the years Bensley has become known as a hotel designer who integrates sustainability into all of his designs, and is now hoping to share this knowledge with as many people as possible, in the hopes that if the hospitality industry bands together, they might be able to do their bit in reversing climate change. 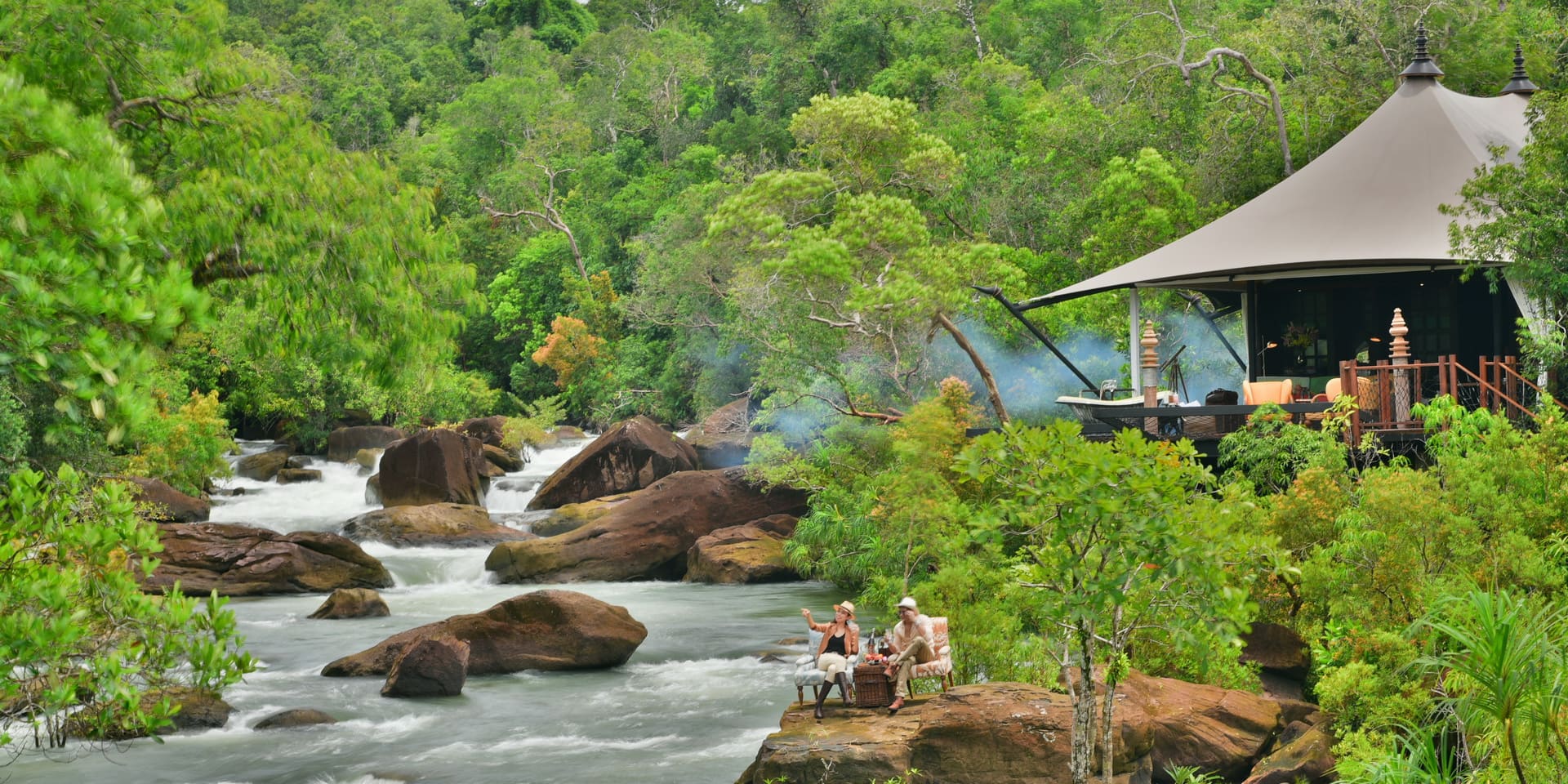 Sustainability is a hallmark of Bensley’s designs.   Bill has loved and respected nature all his life.  From a young age, he was inspired by John Muir’s conservation work in the Sierra Nevada mountain range of California.  John was a Scottish-American author, environmental philosopher and glaciologist and an early advocate for wilderness preservation in the USA.  Bill and his friends would be the first to get permits to enter the trails each spring as they navigated deep snow and hung their food to keep it from the bears.  Even as teenagers, they had a great respect for the wilderness and were careful to leave only footprints.  He has always understood nature’s fragility, especially in the case of fire and water pollution.

The most outstanding and most recent example of this is Shinta Mani Wild – Bensley Collection in the South Cardamom Wilderness in Cambodia which opened in December 2018 and has quickly gained world-wide attention.   It is the culmination of Bill’s life’s work and exactly what he would build for himself.  Comprising 15 exquisitely customized luxury tents, in a private sanctuary in Cambodia’s South Cardamom National Park, the camp is completely built around and blended into the natural environment with a low environmental impact and a huge impact on protecting the National park.  Showing his playful side, Bensley created a 400m zip line over the river and three sister waterfalls over which guests can enter the camp.  The entire project was created in order to showcase and protect nature and wildlife in this fragile wilderness, rather than see the pristine forest sold at a logging auction.

Other examples of projects where Bill has designed stunning hotels with little or minimal disturbance to nature include:

Bill’s other heartfelt passion is philanthropy and one where he genuinely walks the walk and talks the talk.  The Shinta Mani Foundation was founded by Bill’s business partner, Cambodian born Sokoun Chanpreda who has made a huge impact on Bill’s life.  It was Sokoun who introduced Bill to the concept of giving and that charity begins at home – a concept that Bill strongly subscribes to actively participates in at every opportunity.

During his first visit to Cambodia back in 1991, Bill was devastated to see the extreme poverty there and decided to do something about it.  Since that day he has made a tremendous difference to people’s lives both personally and through the Foundation.  On one of his first visits, he met a young boy who was virtually blind who had a soulful singing voice and had sung at the hotel several times.  In addition to flying him to Bangkok for a professional check up to see if anything could be done for his sight (alas it could not as the damage was permanent), Bill learned his family did not have a house, so paid for one to be built which was supervised through the Foundation. 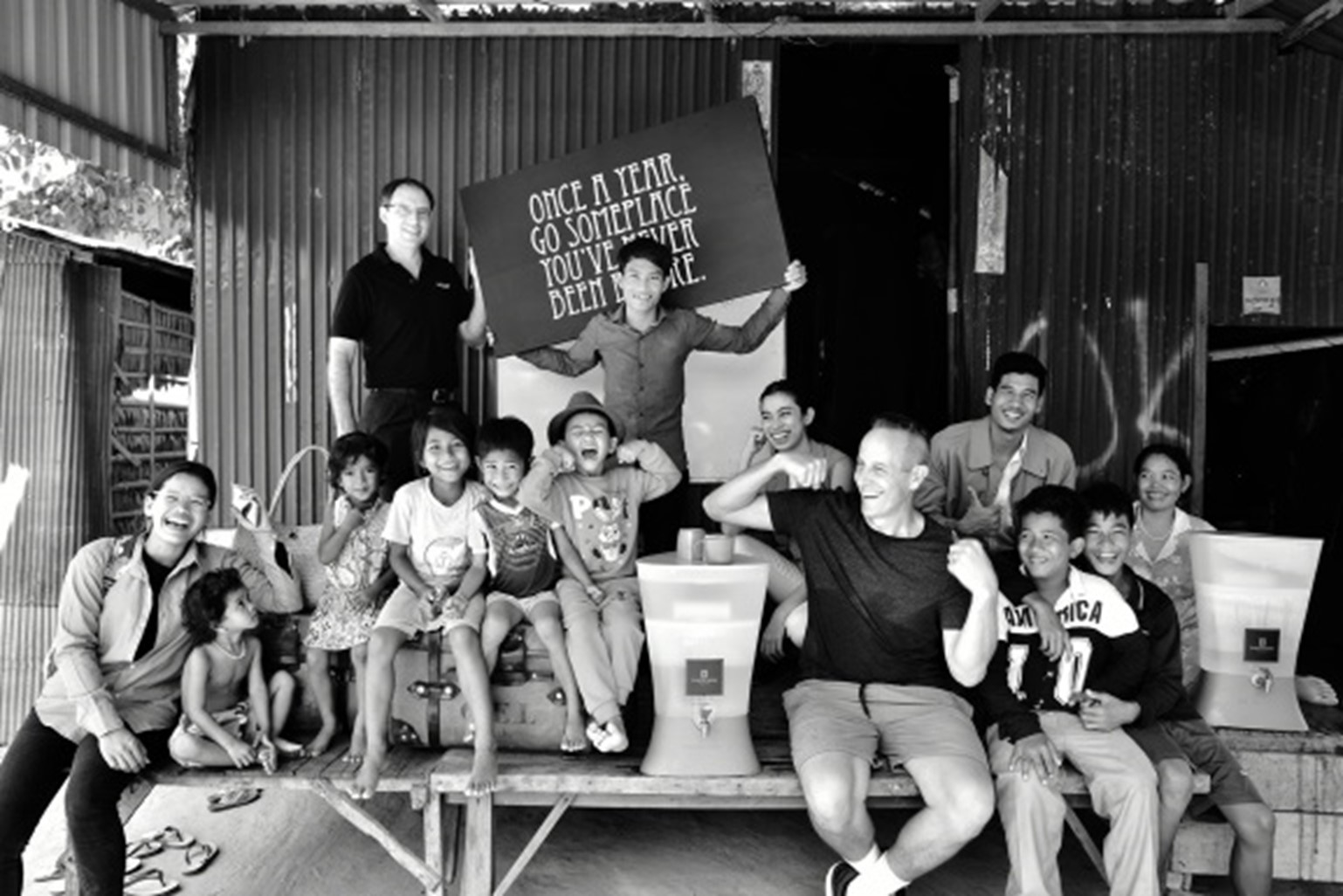 Sokoun Chanpreda established the Shinta Mani Foundation in 2004 which is guided by his personal philosophy of ‘Open Doors, Open Hearts’.  In 2011 their community projects were unified under an independent and locally registered Cambodian not-for-profit organization which operates in the core areas of education, micro-finance, sustainable farming, healthcare and direct assistance.  100% of all donations go directly to the Foundation.

The Foundation is very close to Bill’s heart and they are the main beneficiary of his philanthropy.  Recently when he bought 250 water filters from KOHLER® they very generously matched the donation.  The water filters were distributed to schools, health clinics, hospitals and families in Siem Reap.

Bill is a popular and highly sought-after public speaker around the globe and frequently donates the proceeds from these engagements to the Shinta Mani Foundation to continue the amazing work they do, which to date includes:

The Foundation spearheads the camp’s conservation and community outreach programmes, including providing long-term employment opportunities to the local inhabitants where there is minimal infrastructure and fewer work prospects. Bensley Collection – Shinta Mani Wild, in conjunction with the Foundation, nurtures its natural environment through partnerships with respected conservation organizations including Wildlife Alliance and The Cambodian Government.  Funded by Shinta Mani, the camp’s ranger station enables the non-profit Wildlife Alliance to carry out vital conservation work in the area, including protecting animals from poaching, removing snares and preventing illegal logging.  Guests who share Bensley’s passion for protecting the precious natural environment can join the rangers, motorcycling through the forest on anti-poaching patrols and tracking previously unrecorded wildlife activity.

In January 2020, Bill shared the culmination of his life’s work to date in an open source white paper, “Sensible Sustainable Solutions” for hotel designers, owners and operators to design better hotels, to fight climate change and make the world a better place.  The paper covers three core pillars; to build with a purpose, think locally and sustainably and build sensibly in terms of building materials and energy conservation.  A copy of the paper is available at https://www.bensley.com/media/sensible-sustainable-solutions/

Painting with a Purpose

In 2019 after covid paused his extensive travel schedule, Bill made a wonderful new journey developing his love of painting.  Not a traditionally trained artist, Bill considers himself an Outsider artist. In fact he picked up this passion just recently, practicing wherever he went – airplanes, site visits, on the back of menus… This escalated in 2020 when Bill went from travelling 40 weeks a year to 0! He now paints most weekends and recently opened his BENSLEY Outsider Gallery in Bangkok, currently home to some 80+ artworks. These revolve around Environmentalism, Pestilence, Racism, and the idiosyncratic behaviours of swinging the other way. His artwork is unapologetically colourful, often humorous and at times provocative – but always connects back to those core pillars. All proceeds, both for prints and original paintings, go to the Shinta Mani Foundation and Wildlife Alliance, two causes very close to Bill’s heart.   His artworks can be viewed and purchased at